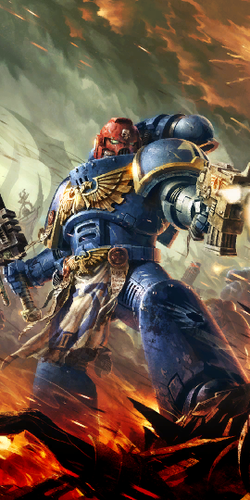 With bolters blazing, the Battle-Brothers of the Adeptus Astartes crush the foes of the Imperium wherever they may be found. Each Space Marine is an elite, genetically-engineered, cybernetically enhanced super-soldier, a mighty and fearless hero worth a hundred lesser men. Each Space Marine is recruited into a thousand-man Chapter, before they are extensively modified, with nineteen extra organs and the crucial Chapter gene-seed. From the numerous Ultramarines and mysterious Dark Angels to the fierce Space Wolves and tormented Blood Angels, each chapter has its own traditions and style of combat.

Armed with the finest weapons the Imperium can provide, clad in suits of intimidating ceramite power armour and borne to war aboard swift and deadly fighting vehicles, they are the Imperium's ultimate weapon. Though relatively few in number, it is the Adeptus Astartes who represent Humanity's best hope for survival -- for they are the greatest warriors the galaxy has ever known.