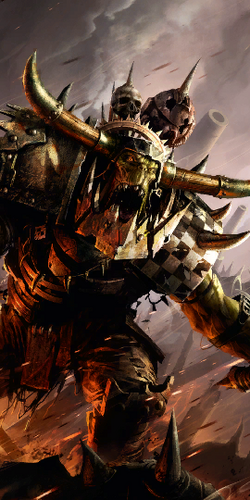 Crude, unrefined, and absolutely brutal in melee, the Orks of Gladius are the usual fare for the world of Warhammer.

Whence the Orks? Heavily-muscled, aggressive, eight-foot-tall fungal thugs with a love of warfare, the Orks were a spacefaring peril long before the human Imperium entered the galactic scene. Spread evenly across the galaxy, for the most part they are an irritant to any other inhabitants, like lazy, belligerent neighbours. But occasionally, as a swarm of locusts, the scattered tribes and clans form into a Waaagh! -- something between a crusade and a riot -- and devastate entire sectors until they run out of things to fight and fall instead into internecine warfare.

That's not to say the Orks are completely primitive. Despite their thuggish demeanour, they possess a low intelligence augmented by genetically-coded technical excellence. Their technicians -- called Meks -- build raggedy, ugly vehicles, buildings, guns and spaceships, which should fall apart at first use, but actually perform their job surprisingly effectively. Imperial scholars believe this is due to the pervasive psychic power of the Orks, which simply fills in the technical gaps that should prevent all their devices from working.

In battle, Orks attacks are undisciplined rampages, full of boisterous chanting and joy of warfare. Their crude weapons and blunt tactics mingled with their resilience and sheer numbers make them a dangerous foe. Even when defeated, their bodies spread spores which, in time, will grow into more Orks, plus their servant races -- Grots, Squigs and Snots -- which keep them alive. Even when every last Ork is dead, the Orks are far from defeated.