Modding is supported by Gladius out of the box. Modders are free to modify it as they see fit, but the developers would like to note the following:

Bear in mind that Warhammer 40,000: Gladius - Relics of War contains IP owned by Games Workshop, and as a result you should consider a few things when creating mods for this title:

This section covers the steps needed to get a Mod uploaded to the Steam Workshop, Which are no longer enable thus removing the function.

A PDF version of this guide is available here

Gladius uses non-destructive modding, i.e., the game’s core files are never modified. In order for Gladius to load mods, they must be placed in:

replacing <mod name> with the name of the actual mod. Any mod files meant to replace their original counterparts must be named and placed in the correct directory hierarchy under the Data subfolder in the main <mod name> folder.

In the <mod name> folder, place a PNG image named Preview.png. This image will be used as the Steam Workshop thumbnail. The image should be less than 1 MB in size to ensure continued compatibility with the Steam Workshop platform.

Login to Steam and Launch Gladius. From the main menu, navigate to Extra → Mods: 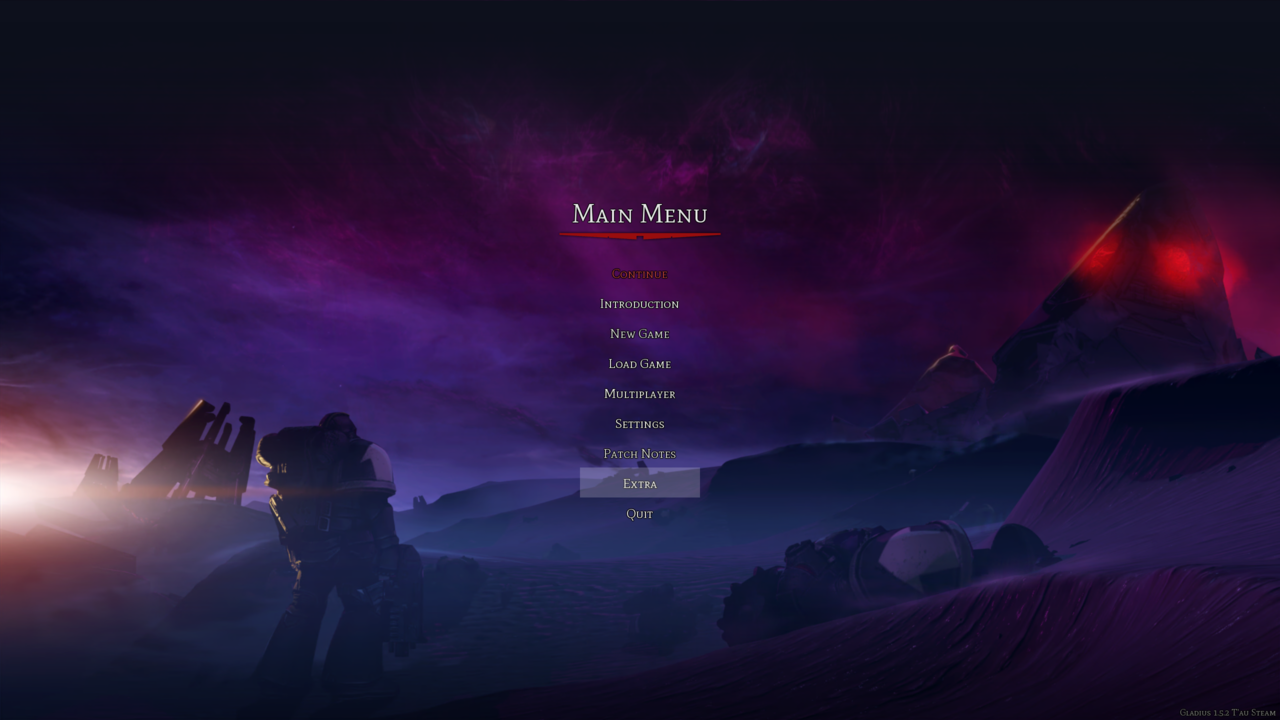 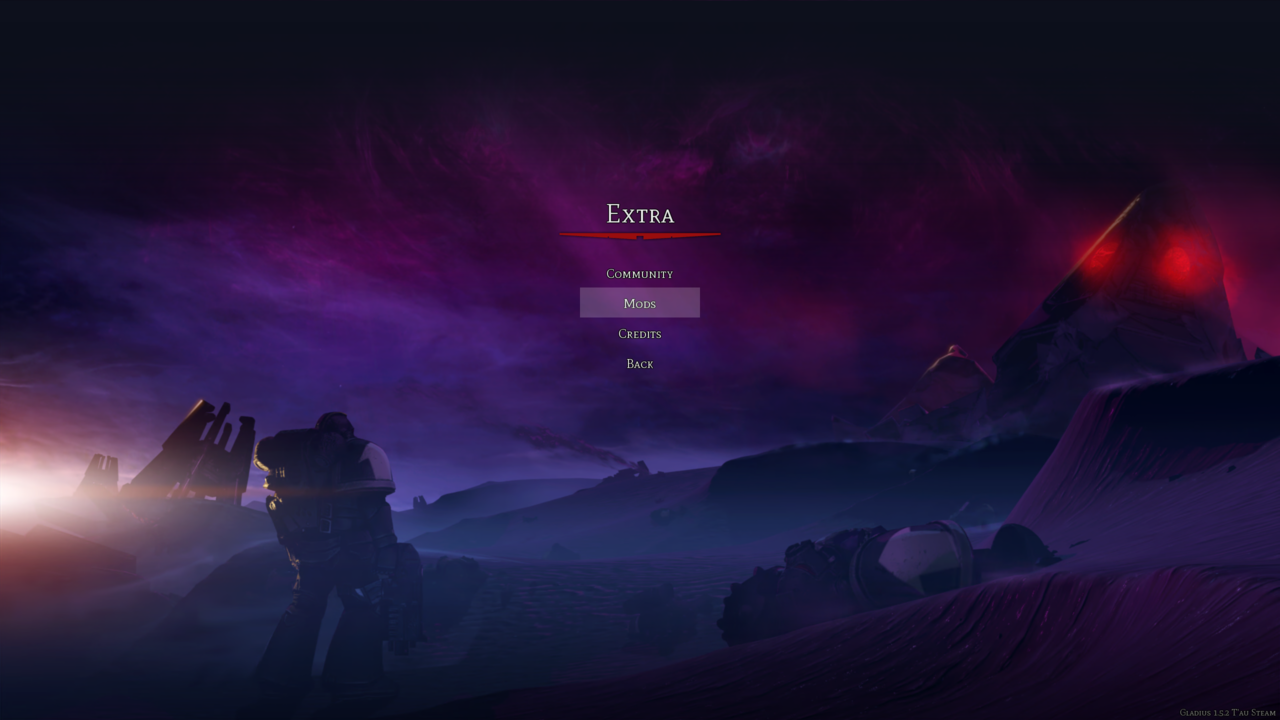 If the mod is placed in the correct location in Step 1, then you should see it listed in the Mods menu: 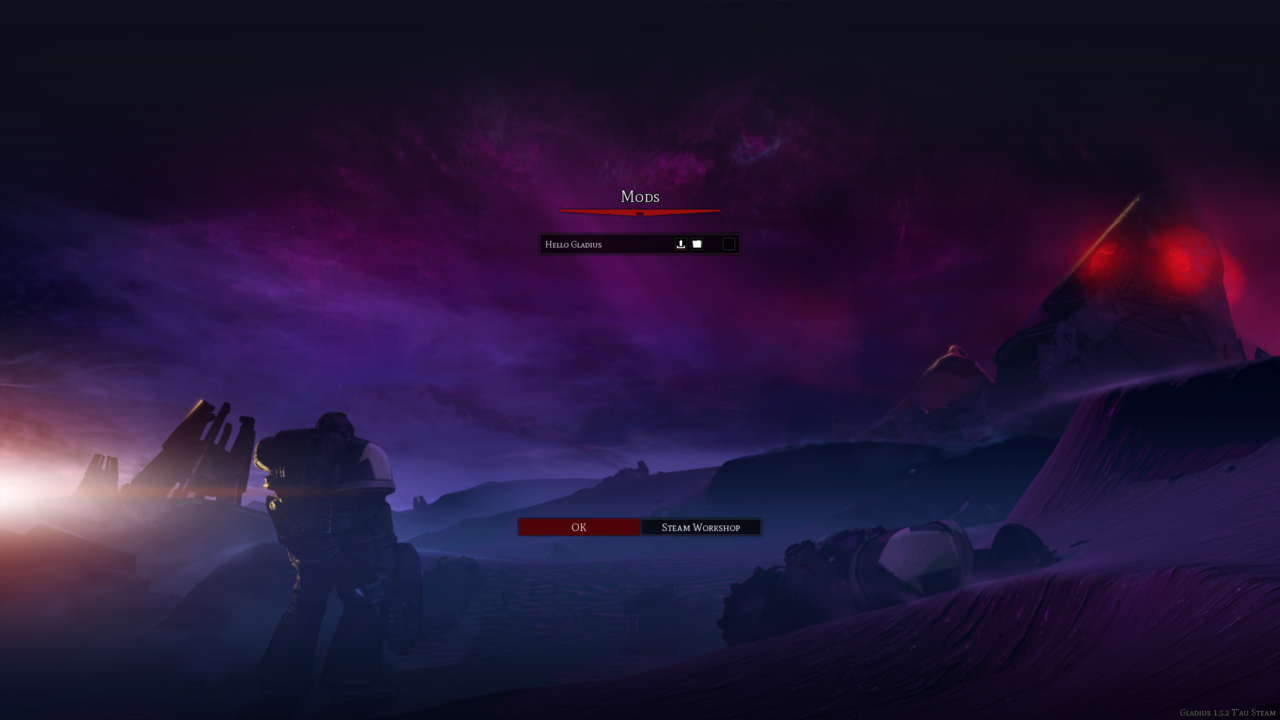 A mod that has not yet been uploaded to the Steam Workshop will have 2 icons for its entry:

Click on the Upload button in Step 2. A window will appear asking you to accept the publishing terms:(No longer supported.) 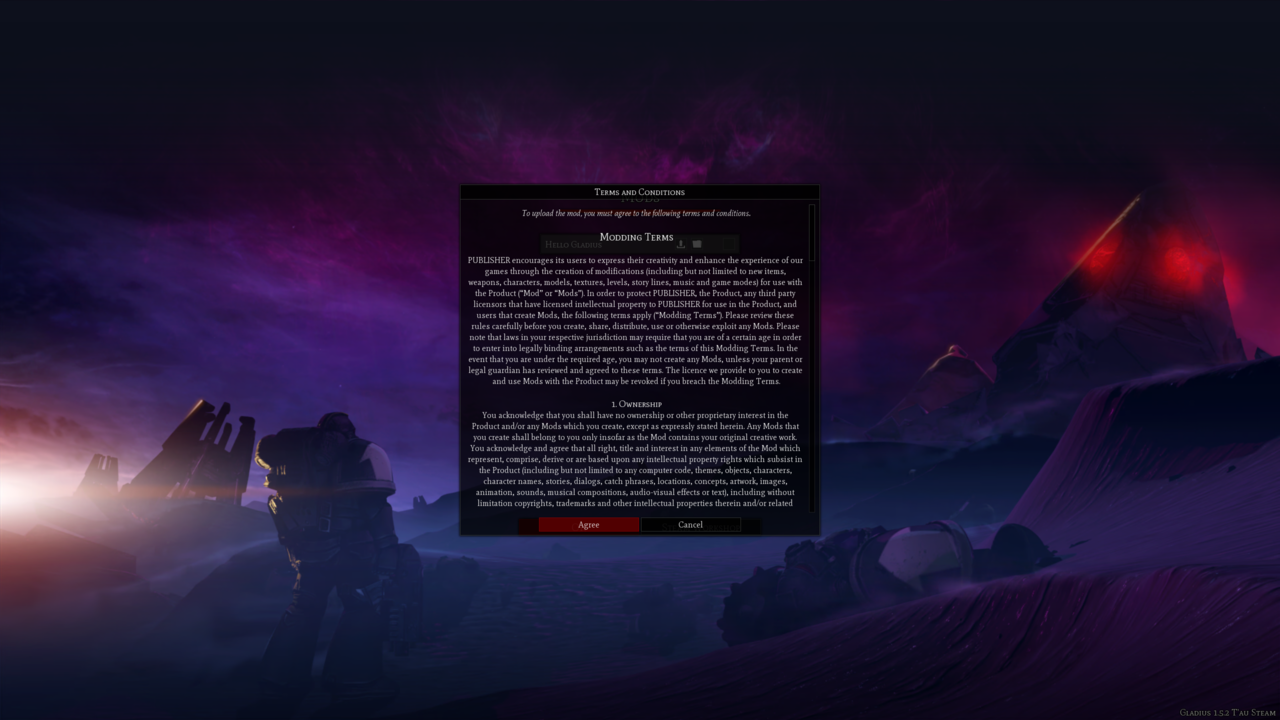 You must agree to these terms if you want your mod to be uploaded to the Steam Workshop.(Feature removed)

Once you accept the terms and click the Agree button, the mod will start uploading. A successful upload to the Steam Workshop will display a prompt saying the mod was uploaded: 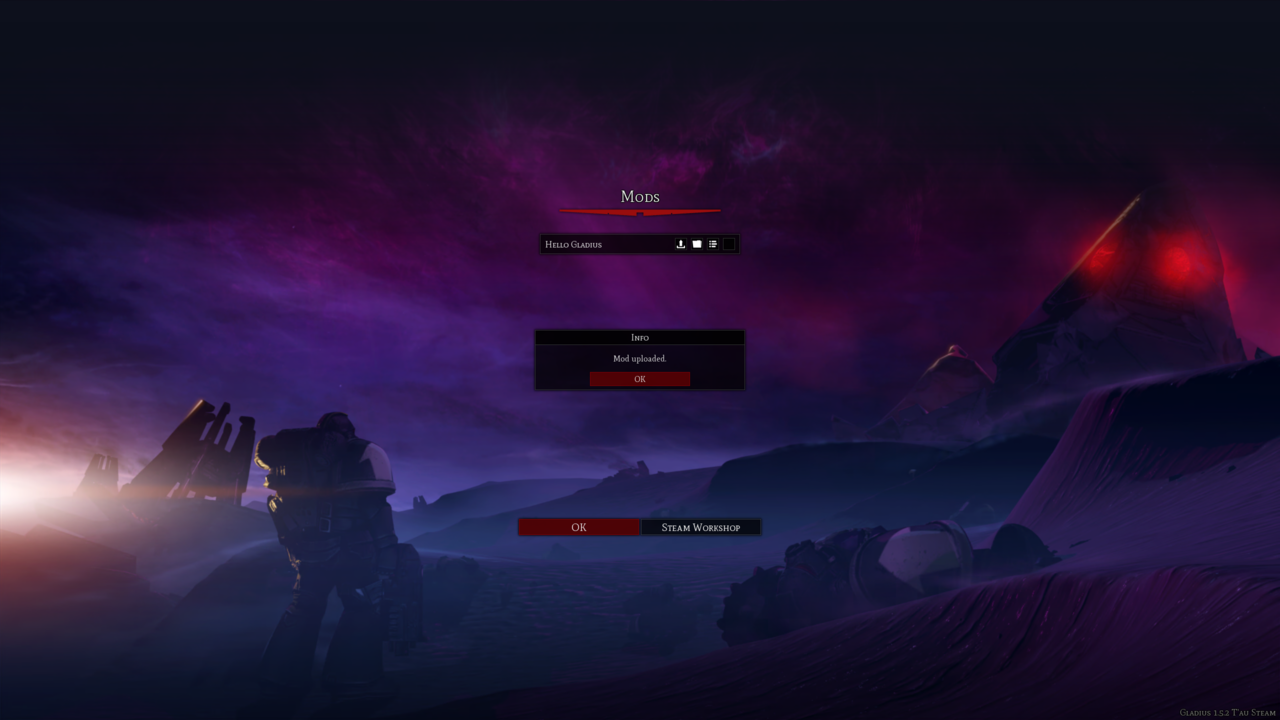 An addition icon will now appear in the mod listing:

After the mod has been successfully published to the Steam Workshop, the mod directory will now contain a file called SteamID.txt:

This file is the unique Steam Workshop URL corresponding to the mod.

Any changes / updates to the mod, simply re-upload using the Upload icon as before.

Here are some common errors you might encounter when attempting to upload the mod:

Practically every aspect of Gladius - Relics of War is moddable; only modifying the game logic remains inaccessible.

You can create new or modify existing:

- References to game directories like \Data, \Resources, etc. are shorthand for

where \Warhammer 40000 Gladius - Relics of War is the top-level game installation directory.

- For brevity, the wiki uses the Windows backslash \ notation with regards to directory identification. Linux users should readily replace the backslash with a forward slash /.

As of patch 1.08, the game uses non-destructive modding (i.e., core files are not modified). In order for the game to load mods, they must be placed in:

replacing <mod name> with the name of the actual mod. Any mod files meant to replace their original counterparts must be named and placed in the correct directory hierarchy (detailed below) in order to be flagged as such by the engine.

All of the game's assets are located under \Warhammer 40000 Gladius - Relics of War\Data:

Rather than further enumerate individually all of the numerous sub-directories, the location of specific remaining content is best absorbed through particular modding ventures. For example, when creating a new "unit", that respective section of the modding guide will elaborate all the necessary files required under \Audio, \Video, \World, etc.

As with any general modding venture, there will often be times where changes will lead to a game crash. To help diagnose the source of the error, in addition to an on-screen error prompt, the game writes an error log to:

Consulting this log file is an excellent place to help narrow down the source of the error.

Every aspect of the game outside of the engine is defined using XML. The difficulty posed to the modder is not XML per se, but rather the general game framework built using XML. In other words, Gladius XML. The engine recognizes certain predefined XML code structure that modders need to adhere to. Opening up an .xml file and changing a value or following a pattern to add to the existing code is trivial. Going through such an example is illustrated at the end of this page. Getting the engine to work with custom XML tags is the tricky part. In this section we give an example of a more intricate nature showcasing how the general Gladius XML framework is structured.

For this example we will consider a simple modification to the colour of the Menu button in the top-right corner of the world GUI. This button is defined using the following code:

Specifically, we are interested in the third-last line <button name="menuButton" ... />. This tells us that the Menu button style is defined as <button>. Now, the definition for <button> is:

From this we see that the original texture used for a <button> is \Data\Video\Textures\GUI\Button.dds. We can proceed by either 1) changing what Button.dds looks like, 2) create a new image, for example, NewButton.dds, and set pressedTexture="GUI/NewButton", or 3) modify TopBar.xml. The modder is encouraged to try the first two approaches and see that they are inadequate solutions. The underlying image used by <button> is system-wide, so aspects of the UI that the modder never intended to change will, in fact, change. Therefore, we are left with implementing a Gladius XML solution.

The engine expects TopBar.xml to pass to it <button>. If the modder attempts to create a new custom XML tag, for example, <menuButton>, then the game will crash. However, the problem is not where to define it, but rather how to define it. There is no getting around the fact that <button> is a construct defined directly in the engine. Therefore, the modder is not going to be successful in trying to create a new construct that the engine does not inherently understand. What the modder can do is modify which <button> will be loaded:

So what we did was define a new XML tag <menuButton> that has the exactly same structure as <button>. Now, in TopBar.xml, we can reference this new button by the type attribute:

The above example demonstrates that XML in-and-of-itself is insufficient beyond superficial manipulation of existing values. Advanced modding relies on understanding the underlying Gladius XML framework.

When creating or modifying units, buildings, traits, weapons, etc, modifiers are very important to know about. More information about their structure, lists of their components and explanations of their effects can be found in the modifiers page.

All images (apart from fonts) use the DDS file format. The freely-available Paint.NET program (https://www.getpaint.net/download.html) is an easy and convenient way to work with DDS images.

The trickiest part in getting images to work in Gladius - Relics of War is to make sure to have the correct export settings for the DDS format. The export settings will appear only after first saving the file in Paint.NET. Use the following export settings:

The only other thing to keep in mind while working with images in Paint.NET is to set an appropriate Opacity-Alpha value (which is accessible from the Colors palette -> More). Setting this value correctly might require some trial and error, especially if it's an image to which the game applies it's own additional filters.

The development team at Proxy Studios has provided the community with official tools that can be used for modding. These are the same tools used in-house by the studio when creating game assets. Anyone who bought the game, automatically gets access to the tools:

By editing \Data\World\Blueprints\WorldParameters.xml you can add an option for larger maps. The original file contains the following code:

We can add a new line at the end to make a new map size, 80x80 with recommended player count of 16:

Now we must also locate the string reference, otherwise the game will crash. We do this by modifying \Data\Core\Languages\<...your language...>\WorldParameters.xml. The original file contains the following code:

where the ... represent other code in the file but not directly pertinent for our mod. We want two follow the same structure as the above code and add two new lines at the end:

We now make sure that the above files are placed in the correct mod location under a suitable mod name and... tada! We just allowed for an epic map size!